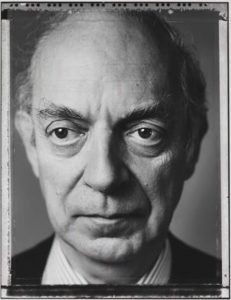 The Hon. John Biffen was an Old Boy of Dr. Morgan’s School and was born in Combwich on Nov. 3 rd. 1930. Fellow Old Boy of both DMS and Combwich, Brian Haggett, who was also a family friend of John, applied for, and got, a ticket for the Service and also agreed to represent our Association in memory of John. His short report is given below together with excerpts from the service:

“My day in London, mixing with the elite, is over. My report to you may be somewhat disappointing. My ticket dictated that I was nearer the back of the church than the front. Consequently, I was unable to see who was coming and going.

Sir Geoffrey Howe was not far from me. I was told that Lady Thatcher was there. I also saw Betty Boothroyd. I was unable to see who was the Queen’s representative. The church was practically full. I’m afraid no one asked if I was representing any organisation. I did manage a few words with Lady Sarah (John’s widow — Ed.) after the service.”

The Lord Mayor of Westminster was received and conducted to her place. The Lord Speaker & The Clerk of the Parliaments, The speaker of the House of Commons, and the Representative of Her Majesty the Queen were treated similarly.

The Introit “Lead me Lord. Lead me in thy righteousness” by S.S.Wesley was sung by the choir. The Dean gave The Bidding; this was followed by the hymn “Guide me, O thou great Redeemer” & John’s stepdaughter Lucy Eggleton read from Hebrews 11: 1-7. The choir sang Psalm 67 & John’s stepson read Rabbi Ben Ezra by Robert Browning.

The hymn “Dear Lord and Father of mankind” followed, and then The address by Owen Paterson MP. The choir sang the anthem “O How amiable are thy dwellings: thou Lord of Hosts” and this was followed by another address from Anthony Howard CBE.

The Dean then led all in prayer, which included:

“Merciful God, hear us as we remember John with love. We thank thee for the gift of his life and for the privilege of sharing that life. Help us to see beyond our grief, inspire us to live with faith renewed, and strengthen us to deepen our trust in thee; through Jesus Christ our Lord, Amen. As we have remembered John’s faith which sustained him let us pray that God would increase in each of us the gift of faith…… Remembering John’s service to this nation in Parliament, let us pray for all who represent this Kingdom in Parliament….. ”

Later came the Lord’s Prayer and Colin Baillieu reading from ‘The St George’s Day Address’ by J Enoch Powell (1912-98). The Battle Hymn of the Republic — “Mine eyes have seen the glory of the coming of the Lord” and the Blessing by the Dean brought the service to its close. The organist played the Regimental march of the Royal Engineers: ‘Wings’ arr Wm. Newstead, and Fantasia on Komm, heiliger Geist BWV651 by J.S.Bach. The bells of St Margaret’s Church were then rung by the St Margaret’s Society of Change Ringers.

The Court Circular, Buckingham Palace, Feb. 19th., noted that The Queen was represented by the Baroness Seccombe (Extra Baroness in Waiting) at the Service of thanksgiving for the Life of the Lord Biffen (formerly Secretary of State for Trade and lord Privy Seal and leader of the House of Lords) which was held in St Margaret’s Church, Westminster abbey, London SW1, today.

Many thanks to Trevor Earthy who also sent me a report on the commemoration service which he had seen online.

We thank Brian Haggett (DMA member) for loaning us the original photo of John Biffen from which the photo on Page 8 was obtained. We acknowledge with great thanks the photography agency which took the original photo, circa 1983, i.e. Universal Pictorial Press & Agency Ltd. — we have tried on several occasions to contact them for explicit permission to publish, both by post & e-mail, but no reply has been forthcoming. Thanks also to committee member Clive Kett for scanning and reducing it to fit into our article.